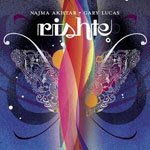 They both possess impressive CVs when it comes to collaborations, and this charming, eloquent mix of Indian and US roots music will surely take its place amongst the most satisfyingly creative results for both artists.
Najma Akhtar is an Anglo-Indian singer who has been recording since the late '80s, when her album of ghazals (love songs), Qareeb, was released to critical claim, and she has been carving an interesting and diverse musical path ever since (including work with Page and Plant). American guitarist Gary Lucas has applied his rootsy, bluesy and often dizzyingly psychedelic fretwork to works by artists including Captain Beefheart, Iggy Pop and Nick Cave, as well as famously contributing to Jeff Buckley's acclaimed Grace.

None of which quite prepares the listener for this elegant and entrancing set of subtly melodic tunes.

Indo-blues would be an easy term to fall back on, but aside from a flighty cover of Skip James's Special Rider Blues, the southern US blues stylings are restricted to the odd slide guitar or electric wig-out and Lucas's trademark bending, winding acoustic notes. Mostly, Lucas provides shuffling rhythmic strums in counterpoint to babbling tabla drum (and violin on two tracks) over which Najma carves out sweeping, swooping vocals. She really does possess the most gorgeous range of vocals, full of colour and playfulness and fluency, and Lucas must take considerable praise for underpinning it all with restraint, plucking out encouragement or driving things on with brisk economy.
The songs are mostly self-written, Lucas providing the guitar parts and Najma the melodies and lyrics (usually in Urdu, but also once or twice in English, a language that does not quite accommodate the full fluent diction of the singer) on songs that possess an almost timeless ethereal quality and ability to sweetly seduce over and over again. A wholly satisfying mix.
Posted by Con at 4:36 AM